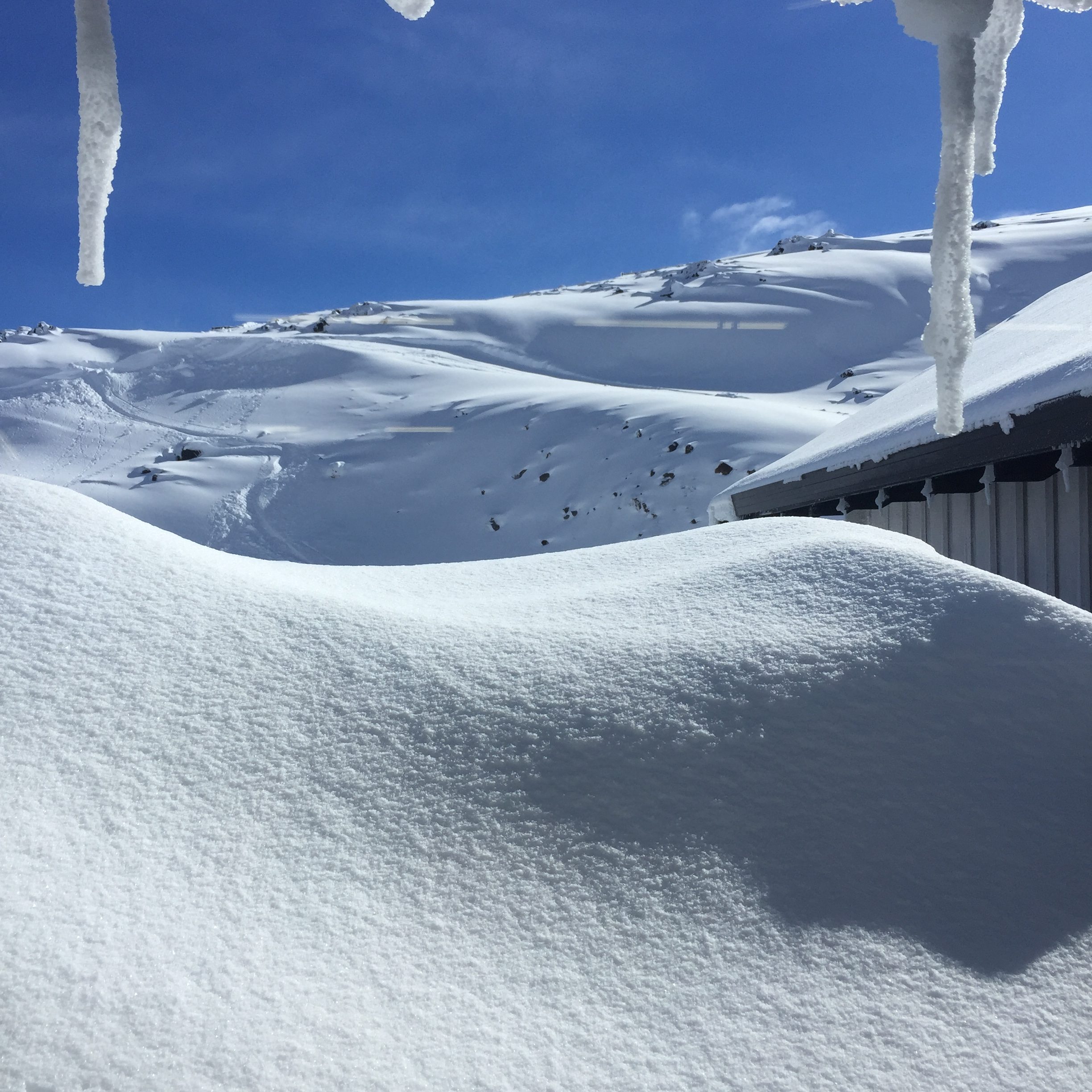 Snow: it covers the hills in winter, creating a fabulous gliding surface for us to enjoy. If you had only ever holidayed mid-winter in somewhere like interior British Columbia, you may only know snow as that soft forgiving surface that falls as recognizable flakes and drapes itself over the environment like a cozy blanket.
In reality, snow surface conditions can vary widely and are related to the type of new snowfall and subsequent transformation after it has settled on the surface.
The type of new snow and its transformation are related to factors such as altitude, slope aspect,  temperature, humidity, solar radiation, wind, slope angle and surface compression or usage.
A classic example that many skiers and riders have experienced is when riding a drag lift (t-bar, Poma etc) on a clear day in cool temperatures. The surrounding runs are “packed powder”, hero snow for all to enjoy and groomed to perfection. Yet the t-bar track is glistening and you fight to stay on a good line as you avoid all the strange frozen ruts on the ascent.
At normal atmospheric pressure, the temperature at which snow melts is zero degrees Celsius. However, this is lowered when pressure is increased. Hence, under the pressure of the passing skis and snowboards, on a day just below freezing the snow melts then refreezes as icy “marble snow”.

Knowing the snow conditions is paramount in the short term in order to judge how our equipment is going to respond as we glide over the snow surface and more importantly turn on it.

In the long term, it is important for avalanche forecasting to know what layers are being deposited and how new snow on top of that will bond and behave.
For this post, I will list a number of these surface snow types, what conditions in which they may expect to develop, and what to expect when skiing/riding them.
The list tends to run from the types seen in colder through to warmer temperatures.
The nature of the surface snow relates to the type of snow crystals, the amount of air and free water between them and their cohesion or bonding.
SNOW SURFACE
POWDER: In colder conditions with relatively lower humidity, the snow is drier and fluffy with a smooth easy turning feel on groomers and the stuff of dreams when unpacked. This snow is dry, consisting of small flakes with air pockets trapped between them. When the temperatures are very cold the “packed powder” can actually be quite grabby and “slow” to ride.
ROTTEN/FACETED SNOW: Snow in places like Colorado that has been in very cold temperatures with a shallow pack and no surface usage pressure, can totally transform to faceted rotten snow. The snow crystals are large, square or cup shaped and bond poorly to other crystals. Difficult to move on no matter what the mode of transport. Facets can form at depth with slab formation over them creating high-risk avalanche conditions.
HOARFROST: Hoar Frost is the formation of crystal-like formations of ice on the surface of objects, including the existing snowpack. The atmosphere needs to be initially damp enough to reach saturation point then cooling allows for condensation.
It’s often a nice snow surface to ride on, but if persistent can leave a weak layer in the snowpack.
WIND CRUST: Just because fresh snow fell overnight: it doesn’t mean the riding is brilliant. Especially above treeline the snow can be wind affected and can form a crust. This may be unsupportable of body weight (breakable) creating potentially leg-breaking conditions for skiers particularly. It also is an important clue to potential wind slab formation on leeward slopes and it’s attendant avalanche risk.
SASTRUGI: Sastrugi is another snow surface feature formed by wind effect. They are solid snow waves pointing into the direction of the prevailing wind between which loose snow has been blown away. As might be surmised by the nature of its formation, is often found on windward slopes. Horrible, teeth shattering riding conditions and not the surface on which you want to be throwing the skis sideways.
RIME: Rime occurs when freezing fog comes into contact with surfaces and forms hard crystals that grow into the wind. It can be seen on lift towers and rock formations, and on ridges where it can make negotiating by ski or board unfriendly. It is responsible for the formation of “snow ghost” trees. Not pleasant if it forms on your goggles while riding!
GRAUPEL: This is also called snow pellets and looks like styrofoam beads. It forms when supercooled water coats (or Rimes) snowflakes, and occurs when there is strong convective activity in a storm. It’s often mistaken for hail, is not clear like sleet and can create a fun gliding surface for skis but also for any later dense snowpack which may form over the graupel. Can be associated with lightning!
RAIN CRUST: This a frozen layer produced when rain falls on a snowpack and then refreezes forming a smooth layer. Can be breakable or supportive of a skiers weight but essentially like skiing ice.
ICE: Here we are referring to the colloquial term relating to a very hard snow surface. In reality, all frozen water is ice, and snow crystals form as hexagonal ice crystals in the atmosphere shatter leaving spindles that reform on particulate nuclei forming typical flakes. However once on the surface, with significant transformation, small rounds are formed in a compact mass with little water or air pockets and strong bonds. Requires sharp edges and gradual application of movement to prevent sliding sideways while riding.
FIRN/ CORN: Usually found in springtime but can occur in warmer regions at any time of the season on sunny aspects. This is part of a freeze-melt cycle and the type of snow that transforms under the sun’s rays during the day.
It has many rounded granules with a high water content that is partially melted then refrozen forming bridges between the rounds. As the snow surface warms again the bridges break down to form the corn granules.
It fabulous to ski but you need to have your timing right: too early in the day and it will still be icy (there are other winter sports on frozen water that we can do). Too late and it will be very slushy with increased soft snow avalanche risk.
To learn more about snow, particularly avalanche hazard and rescue, join us for Medicine in the Mountains 2018 in Silverstar, British Columbia, Canada.

Join Our Medical Conference In the Snow – 2018

If you enjoyed this article and are interested in more information like this please sign up for our updates.
If you are looking for continuing medical education in 2018 with fun and adventure
Check out our Intrepid Medical Confrences here.