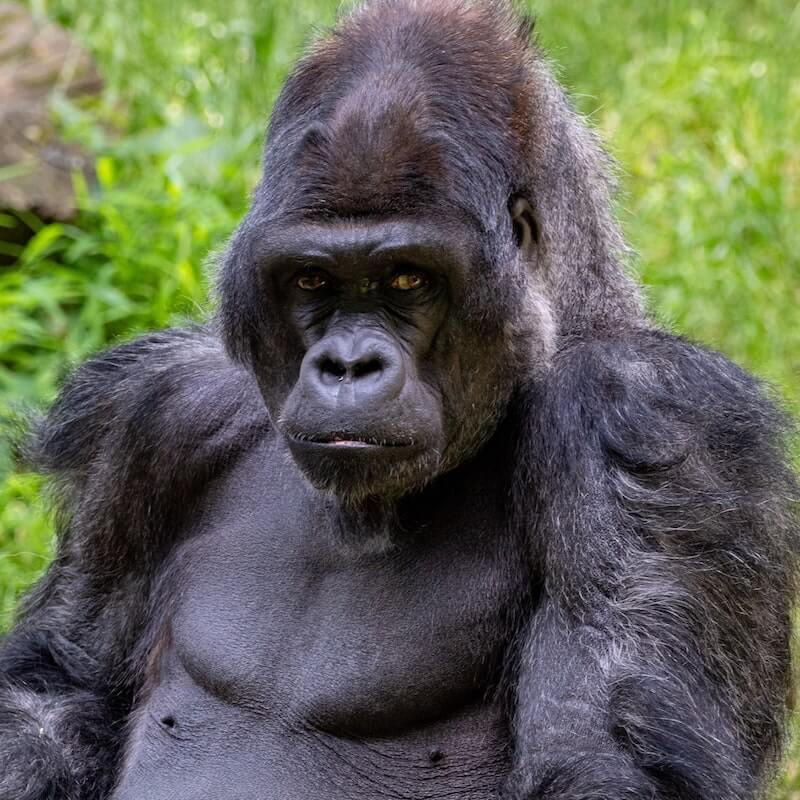 This is an update to last months article. In our last post,  we covered the potential risk of COVID-19 to endangered great ape populations around the world and the current mitigation policies in place.

We had stated that in Bukit Lawang, Sumatra, that overnight trekking into the jungle abode of the Orangutan had been banned. We have been further advised from the team at Green Hill Guesthouse, Bukit Lawang that ALL trekking is now officially off-limits during this pandemic crisis and has been since March 18th.

In addition to this update, it is worth taking the time to explore other news as it relates to wildlife during the pandemic.

It’s not only the Great Apes, other wildlife can be affected by COIVD-19

Wild meat consumption was banned in China in February after links of the virus to the Wuhan market. That was good news for the illegally traded wildlife; however better news came this month with pangolin scales being officially de-listed from the approved Chinese pharmacopoeia.

Pangolins are one of the most widely poached and illegally traded species and are used for meat and their scales throughout Asia. The Chinese Pangolin is functionally extinct and two other of the four Asian species are on the IUCN red list.

Pangolins are a natural host of beta coronaviruses and so were suspects initially as being responsible for the transmission of the virus to humans. It appears, however, that although genetically similar, it is unlikely that it was a pangolin coronavirus that jumped to humans as COVID -19.

The Pangolin species found in Sumatra is the Sunda Pangolin (Manis javanica). These solitary nocturnal animals whose genus has been around for 80 million years has reduced in population by 80% in the last 20 years, mostly through illegal poaching.

Domesticated animals are also at risk of contracting the virus

American mink (Neovison vison) is farmed en masse to supply the fur trade. The Netherlands is the fourth-largest producer behind China, Denmark and Poland and there have been ongoing attempts at shutting the industry down in that country in response to welfare concerns.

The animals are kept in high density in small wire cages.  Farmers had been given until 2024 to shut down operations. It appears that Covid-19 is accelerating the demise of the industry.

The first mink were noted to be infected in April showing signs of a respiratory illness. Then some were dying. Post mortems confirmed  COVID-19 infection and the initial outbreak was thought to have come from infected farm workers.

Of significant concern, however, was the highly likely scenario of mink to human viral infection of two farm workers: the first documentation of COVID-19 animal to human infection.  With public health concerns, a sudden end is coming to fur farming in the Netherlands. Unfortunately, many of the animals have had to be culled.

Then we have our Zoo animals to think about

The first zoo animals to test positive for COVID-19 were a number of tigers and lions at a New York Zoo. They were thought to have become infected from a zoo keeper. They were tested when they showed signs of respiratory illness.

Although the illness appears to be mild in felines, it can be passed from cat to cat as demonstrated in a Japanese study. At this time there is no evidence of cat to human transmission but felines can catch the disease from humans.

Thus far, anthroponosis with COVID-19 has only been observed in domesticated or captive animals. The same is the case with zoonotic transmission from the mink and presumably from bats in the Wuhan market. However, this is the concerning aspect of the COVID-19 virus. It does appear to be able to jump easily between different species.

Linfa Wang, the director of emerging infectious diseases at Duke-NUS Medical in Singapore was interviewed for NPR. He is concerned about the possibility of the virus taking hold in wandering wildlife populations: for example, North American bats would be a vector that could carry the disease asymptomatically and spread the disease widely. It would be difficult, in this instance to be able to eradicate the disease.

So based on our last two blog posts here  and here there are altruistic and selfish reasons for us to take care of our wildlife. We don’t want to put endangered species such as the great apes at further risk from this infection. Measures to mitigate against this will, unfortunately, need to be in place as long as the pandemic rages. Part of our ethos at Intrepid Medical Conferences, particularly in our Jungle Medicine conferences,  has always been to help people become aware of these issues that affect our closest relatives and all the animals we share this planet with.

From a human-centric selfish perspective, we need to stop wildlife poaching and trading to reduce the risk of zoonotic transmission. We need to let species such as the pangolin get reestablished in the wild.

Practices of holding wildlife in high density, close confinement increased the risk of viral spread. Fur breeding of mink and captive civets (another known coronavirus vector) for production of Kopi Luwak (civet coffee) are examples of high risk farming of wildlife that should cease.

If these things can occur, there may be a chance of a return to balance, to some degree at least, that will hopefully aid in the prevention of any further pandemics like COVID-19.

With the unprecedented changes happening in the world right now, we understand that people don’t know what is happening next week let alone next year! With that in mind, we have postponed all Intrepid Medical Conferences until such time it is deemed safe to travel.
In the meantime,  you can join our mailing list for regular insights on topical, mountain, jungle and physician wellness.